Bugbear Entertainment and Great branding approached Kauas with a need to advertise a brand new car game to an audience that barely knew of its existence. As one of the oldest and still operating Finnish game companies, Bugbear had lots of hype to live up for, having created genre classics in the past such as the much celebrated ”Flat Out” series. And the results of the collaboration were very impressive.

“Bugbear had pretty much all eggs in the one basket so it was extremely important to make it succeed.”

It had been quite a few years since their last breakout hit so this was very important project for the company.
“Bugbear had pretty much all eggs in the one basket so it was extremely important to make it succeed.” – Janne Alanenpää, Managing Director, Bugbear Entertainment Ltd.
Our mission was to help bring a fairly unknown game called ”Wreckfest” to a larger audience and help them achieve stardom in an extremely competitive genre dominated by the likes of ”Forza” or ”Gran Turismo”.

The car game industry is saturated with games that promise speed, thrill and action greater than the other games. Gamers are fast, skilled and capable, thinking they’ve seen it all while trying to shave those milliseconds off of their lap-times on other platforms.
Bugbear had developed this game with 20 people, compared to teams of hundreds of people their competitors have, so this would give an idea on the scale of the budget we were working when compared to the competitors.
”Bugbears vision was to make the Wreckfest the first own IP for fifteen years and that was a new kind of challenge financially and technically. Production time for the game was exceptionally long with a very limited budget but deep engagement with the community.” – Janne Alanenpää, Managing Director, Bugbear Entertainment Ltd.

By embracing of what they already were, not trying to be everything to everyone, but absolutely everything to some. Wreckfest was unlike any other car game out there, the underground fight club, the slum football league, the wrestling mud pits. It was the damn UFC of driving, the illegal casino of car games, the “Westworld” of racing.
You couldn’t just waltz into Wreckfest with your old bag of Forza tricks, or your Grand Turismo speed skills. You do that you’d get chopped, crashed, burnt and sent home in a bodybag.
Research here was key and this is where our most important work was done. In the mud pits of fandom and relevant culture that the gameplay of Wreckfest was based on. As we dove into this astonishing world, we found a deep south, redneck, gas guzzling, alternative motor-sporting scene that had an almost cultish following.
After hundreds of pages of forum posts, Facebook groups, literature and photography, we found the key to unlocking the potential of marketing Wreckfest.
The three different driving styles provided by the gameplay actually represented very accurately three unique target groups that were found in the real world of motorsports, taking us immediately outside of the scene of just motorsporting and making us relevant in the real world.
Suddenly instead of having to sell on pure game specs alone, we could tap into this absurdly passionate culture of cars and alternative motorsports giving us a second emotional touchpoint with which to capture the hearts and minds of our audience. As the gamers say, we had ourselves a proper way double tap the targets.
It was time to paint the world of Wreckfest, and introduce to it the Racer, Crasher, and Bonebreaker. 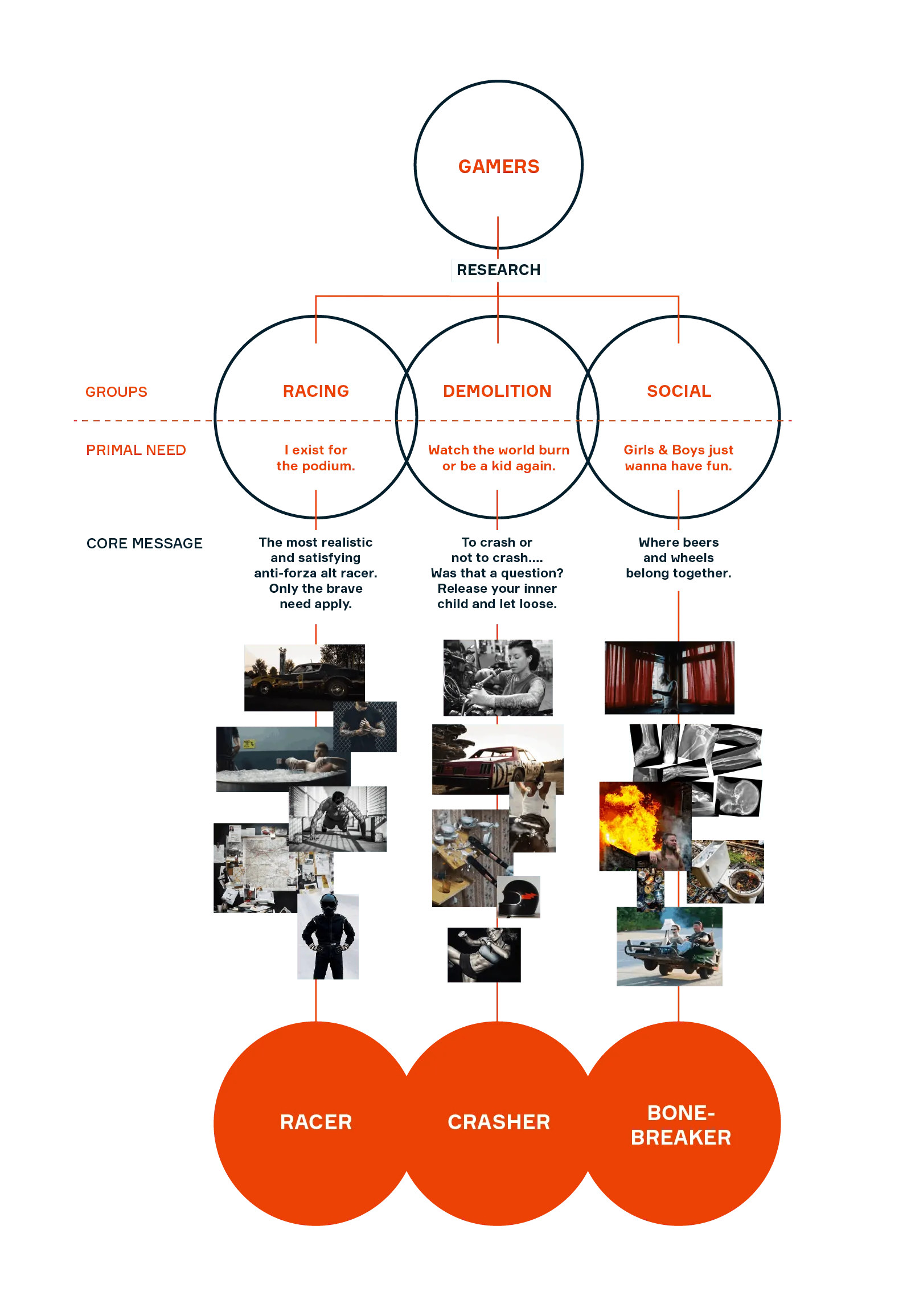 Our strategy was three-fold from the get go, as we knew that a console release was on the horizon in the near future, giving us multiple campaign timelines to build upon to capture the hearts of our audience. 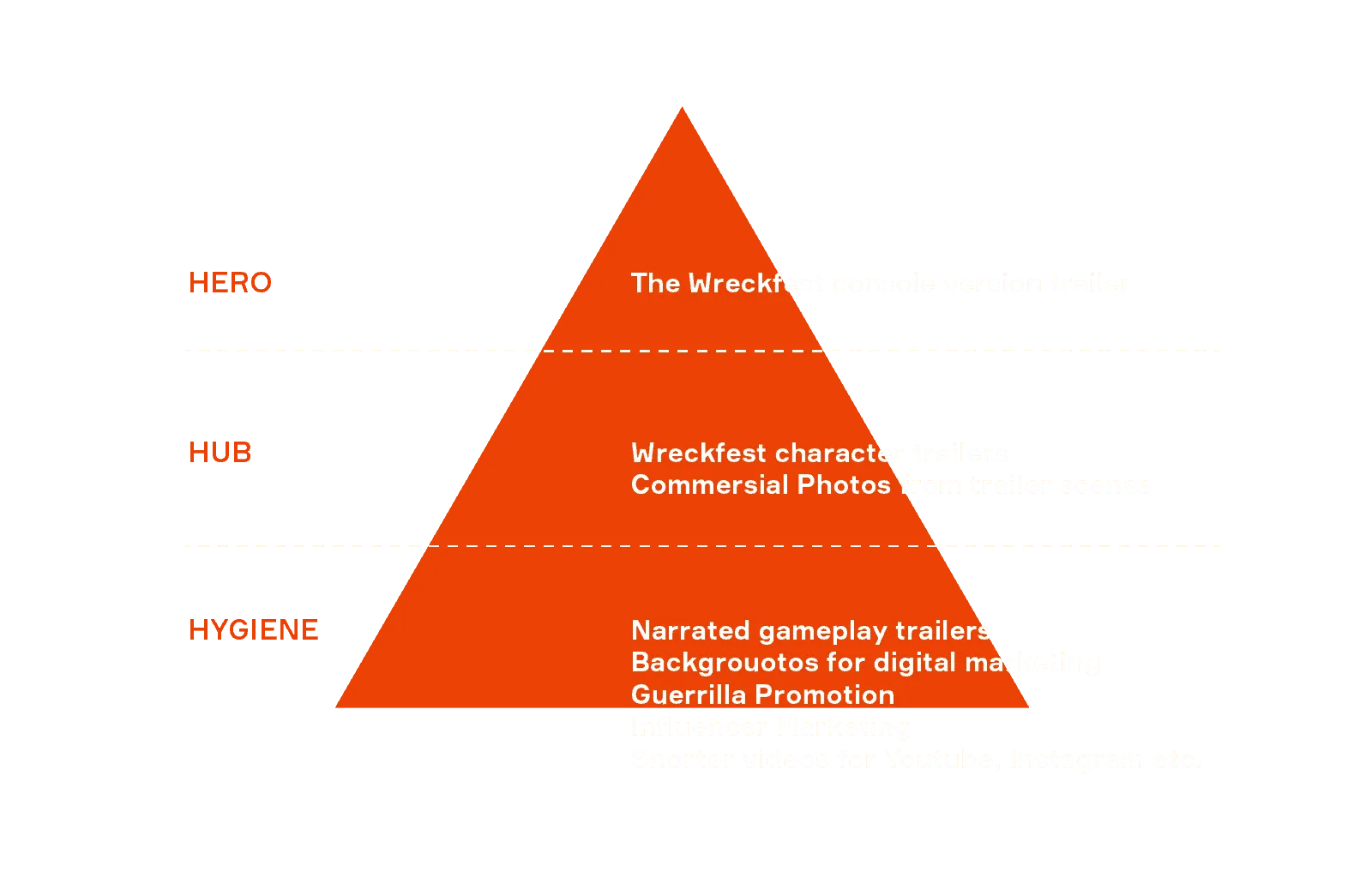 The final product got really good welcome from the fans who were digging into the different creative approach, THREE characters story and quality of sound and voiceover. At the release week the game was #1 in Australia, #2 in UK which were really important markets for it.

Trailers got approximately 40M video views and generated almost 1M clicks and 110K engagements (likes or comments) 98,5% of which were likes, and only 1,5% dislikes. All this raised the brand interest +147% and Wreckfest consideration +10,5%. 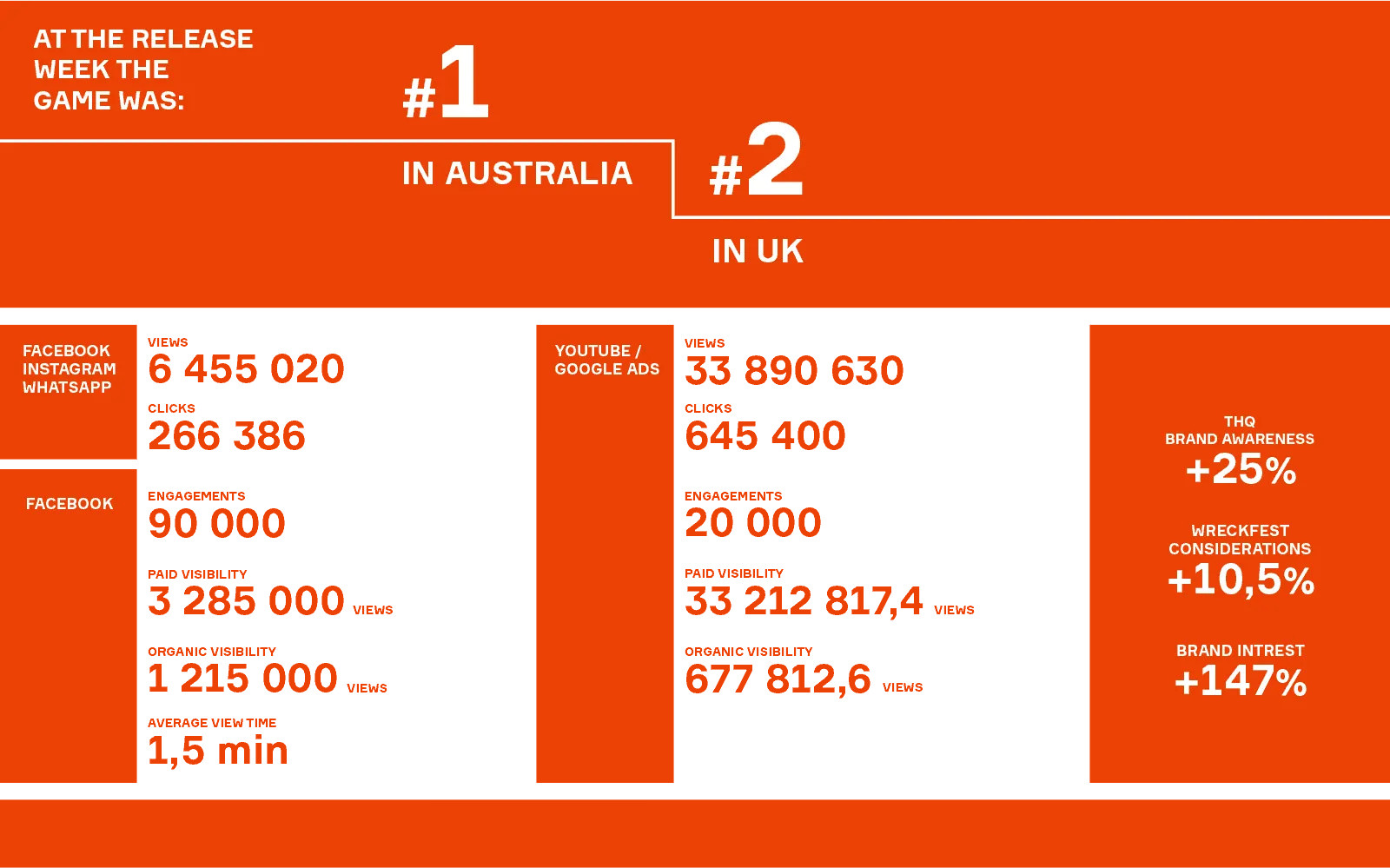 Release trailers were fundamental part of the whole marketing campaign and each trailer had direct affect into the sales of the game. The game has been fighting for the top chart positions all around the world and has received a lot of critical acclaim and several ”the best racing game” nominees from the media and gamers. In late 2018, Bugbear was acquired by Embracer Group AB/THQ Nordic and the company is now happily a part of their family. Bugbear is celebrating 20th Anniversary this year. Any of this wouldn’t have been possible without success of Wreckfest.